I'll be the first to tell you that I am far from the best bug tyer when it comes to pure aesthetics. The same goes for my Bombers. My bugs and Bombers certainly aren't pristine. They are very durable, however. The trick is to reinforce the hackle with thread going in both directions. It kind of mashes down the deer hair body in places and makes the bug look a little unkept, but it does a great job of protecting the hackle. I'll take durability over looks any day when it comes to a workhorse pattern like this.

Another thing to remember is not to pack the deer hair. You don't want this fly to be too buoyant. If you want your bugs to fish a little deeper, replace the deer hair with chenille.

This is my first attempt at a step-by-step post, so please forgive any clumsiness on my part. I hope to iron out the kinks as I do more of these.


When I first met a group of what would become my Russian fishing buddies on the Kola River, I was using a Shady Lady variant, tied on a #2 double (see below). My friend Alexey pointed at it and said, "Bomber!" Through a friend/translator, I told him it wasn't a Bomber and we fish it like any other wet fly. He didn't quite believe me, so he took my rod and dabbled my fly in the river. He was surprised to see that it didn't float. During my stay there, this conversation repeated itself each time a Russian angler asked to look at my fly box.

The Buck Bug is a shrunken derivative of the Bomber, first tied by Rev. Elmer Smith. I believe Rev. Smith intended his bugs to be fished dry (similar to the Bomber), but were later found to be extremely effective wet flies. The body of spun deer hair can be deceiving. They sure looks like they could be  dry flies. Some anglers grease them and fish them as small dries, though I have not tried that yet.

For the most part, I fish two different Buck Bug patterns; a Shady Lady variant and a Green Machine with a white tail. The templates of these Buck Bug variations were developed by Emerson Underhill of Barnettville, New Brunswick (the story of both can be found here). I carry around a couple of Smurfs and a few natural-colored bugs, but I never really gave them a shot since other two seem to work well enough. I use the Green Machine on bright days and the Shady Lady on dark days.

Stay tuned for a Shady Lady tying step-by-step to follow...
Posted by Ben B. at 8:36 PM No comments:

A Quick Q&A with Topher Browne

I first became acquainted with Topher Browne when he appeared on the Ask About Fly Fishing podcast in 2011. I was preparing for my trip to the Kola River and I had many questions. Unfortunately, none of my questions made the show, but Topher was gracious enough to help me (at length) via email. We met a few months later at the Fly Fishing Show in Somerset, NJ, where we talked equally as much about salmon fishing as we did another shared passion, jazz music.

Topher is a world-class angler, fly tyer, guide, spey caster, casting instructor (see the DVD “Spey to Z”) and is on the professional staffs of Sage, RIO Products and Patagonia. More recently, he has gained acclaim as an award winning author. Atlantic Salmon Magic (Wild River Press, 2011) is a monumental contribution to the lineage of salmon fishing texts. Perhaps more than any other branch of fly fishing, Atlantic salmon fishing is steeped in tradition. Topher focuses as much on traditional techniques and strategies as he does on modern approaches from around the globe. For me, the best parts of the book occur when the areas of traditional methods and modern flies and equipment intersect (i.e. Chapter 8 - The Sunk Fly). Besides a wealth of information on salmon fishing essentials, a generous amount of the book is devoted to the biology of the salmon itself. Add to that a chapter on salmon rivers worldwide and you have a book that appeals to all Atlantic salmon anglers, old and new.


Topher is this blog’s first Q&A participant. Hopefully there will be more to come in 2013.   As always, your feedback is greatly appreciated. Enjoy... 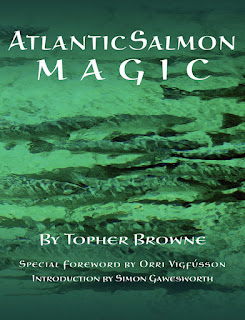 Tell us about your first Atlantic salmon fishing experience. How old were you and how did you get started?

TB: I started fly fishing at 15 and fishing for Atlantic salmon in my mid-twenties. I hooked and lost a salmon on my first half dozen casts. Very lucky. I’ve been hooked ever since.

How did studying with Warren Duncan help to shape you as a fly tyer? Are there any pearls of wisdom, unique to Mr. Duncan, that you might not have learned elsewhere?

TB: Warren was an exceptionally efficient fly tier, absolutely no wasted motion at the vise. Fifteen thousand or more salmon flies per year will do that for you. His greatest lesson was to instill precision at the vise. If something was not right—proportions, material selection, general sloppiness—he would make you fix it before moving on.

Your book Atlantic Salmon Magic is an engrossing and all-encompassing study of the sport. At what point in your fishing career did you decide the time was right to start writing? What was the most challenging aspect of the project?

TB: I felt the time was right to put pen to paper when I thought I had a reasonable handle on why salmon do what they do and when they do it. I wrote the entire book with no notes, not even an outline. The hardest part was the layout—a lot of back and forth with the editor and the art director. It was not a painful process, but you can’t change one thing without that change affecting the layout for everything else.

TB: Most North American salmon anglers are not particularly good with the sunk fly. By contrast, most European salmon anglers are comfortable with sinking lines and sunk flies when conditions dictate. The average Euro angler could widen his horizons a bit by committing to the riffling hitch or even the dry fly when the conditions are ripe for either approach.

The lack of any opportunity to fish for wild Atlantic salmon in American waters certainly doesn’t help draw young (American) blood into the sport. Where would you recommend a twenty-something angler start his or her Atlantic salmon journey?

TB: All Atlantic salmon fishing (for sea-run fish) is currently closed in the United States. If I were getting started on a budget, I’d head to either the Matapedia or the Matane in Quebec. Lots of public water, good numbers of salmon, and reasonable fishing rates.

What was your most memorable or unique salmon fishing experience?

TB: Norway. I was mightily impressed with the size of the rivers, the difficulty of the fishing, the incredible scenery, the strength of the salmon and the fishing ability of the average salmon angler. They fish at a very high level over there.

Where are you just itching to fish that you haven’t yet been?

TB: I wish we had a salmon fishery here in Maine. We used to, and I miss it. I would also like to fish either or both the Kola and the Umba Rivers in Russia. Something about those rivers and that fishing really appeals to me.

Give me your three desert island albums.

TB: The complete recordings of Justin Bieber. Only kidding.

I’d have to say Brad Mehldau’s latest, “Where Do You Start,” “Sketches of Spain” by Miles Davis, and “Fly” featuring Mark Turner, Jeff Ballard and Larry Grenadier. There is some sinfully good drumming by Ballard throughout, particularly on “JJ” and the Hendrix tune “Spanish Castle Magic.” Anyone who feels the double bass is a simple rhythm instrument should pay especially close attention to Grenadier’s soloing. 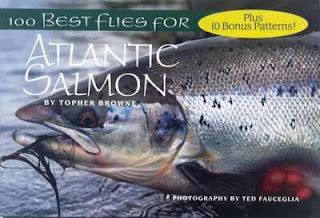