The autumn broodstock Atlantic salmon season Connecticut is almost upon us, possibly a little over one month away. This is the first post in a multi-part series intended to help fly anglers gear up for the 2013 season. In Part I, I will share a few thoughts on how this fishery benefits the fly angler.

Overall, this fishery is very popular with anglers, though it has its share of detractors. Some of the complaints are that the fish don't fight hard enough, it's too "artificial" of a fishery, etc. Maybe some of that is true, but it has been very enjoyable and helpful to me in some very specific ways.

Last year, I  debated the merits of this fishery with another Atlantic salmon fisherman. I am willing to bet that 100% of his salmon fishing experience has been under the watchful eye of a premier guide and probably in a canoe for a significant amount of that time. There's nothing at all wrong with that. I enjoy fishing that way. I also enjoy doing it all by myself though. There's a sense of satisfaction I get from showing up to a pool that is new to me, dissecting it, hooking a salmon on one of my flies and landing it by myself. It's a lot to get just right and it can be hard to do when one doesn't have the luxury of living near a river with a healthy and fishable run of Atlantic salmon. In many ways, the Connecticut broodstock salmon fishery has prepared me for the latter scenario.

Fall of 2011 was a cold, wet and all around strange season. As a result of a freak October snowstorm, the rivers were overflowing with frigid water. We lost power for four days and cabin fever had set in big time. With my wife home to relieve me at generator and sump pump duty, I decided to fish the Naugatuck with a buddy. The river had dropped from something like ObsceneThousand cfs to 1100cfs, which is still a very high flow. The water was bitter-cold from the snowmelt and wading was very challenging.

We were casting from the trees, so having the ability to fish a two-handed rod really came in handy that day. I used my 13' rod with a floating Compact Scandi head, an extra-fast sinking polyleader and an aluminum tube fly (a Flamethrower-type tube in L.T. Special colors, I believe). I was fishing over a reliable lie in a popular pool when a fish took my fly. The fish bolted downstream into the heavy flow. Normally I would have followed her down the pool, but that was impractical in the high water. I fought her from my furthest landing spot downstream and had to haul her, all my line and some backing against the swift current. Ultimately, I landed her and gave her a quick release.

It was a chore landing some of those fish alone that fall, but it was it was great training for my trip to the Kola Peninsula the following spring. Low water in the Kola and Kitza Rivers was an even more challenging wade than high water in the Naugatuck. Safely landing sea-liced Kola springers alone was not easy in some of those pools, but I had practiced for it, so I could take certain tough scenarios in stride.

The example above is how the broodstock fishery helped improve one or two specific skills. There were plenty of other skills I have honed along the way, such as two-handed casting, presenting wet flies and dry flies properly, waiting on the hook set (a critical skill), hooking salmon who rise but don't take, unorthodox techniques, etc...the list goes on and on. Without a salmon fishery close to home, it probably would have taken me a lot longer to figure some of this stuff out, especially when I've found myself on a wild salmon river, unguided and left to figure it out largely on my own.

Atlantic salmon fishing trips can be expensive. Before you go, it pays to be as comfortable as possible with as many scenarios as possible. Obviously, you're not going to see many of the scenarios you'd find on a wild salmon river, but there is more overlap than most anglers think. It only costs as much as a resident or non-resident Connecticut fishing license, so you might as well practice here instead of practicing wherever "there" might be (i.e. Canada, the UK, Iceland, Scandinavia, Russia, etc.). This fishery can be a great introduction to the often bizarre nature of Atlantic salmon fishing. It's a good way to learn how to shut off your "trout brain," an essential skill for anglers without a salmon fishery near home.

...and, along the way, a few of those broodstock salmon have fought pretty damn hard. Hook into enough of the early fish and you'll see what I mean. Though most are lethargic, mixed in are some barren, chrome fish which never spawned and will definitely get your attention when they go berserk, cartwheeling through the pool. I landed one last year that I swore was the hardest fight I've gotten from one of these fish until I hooked (and lost) another demon later that week. It was only in the 8-10 lb. range, which was about average size last year, but I never would have known I was on the Naugy by the way it fought (except for that special Naugatuck "ambience").  That fish fought harder than my first Russian salmon and a few of my Canadian salmon, believe it or not! Water temperature probably has something to do with this, as my most memorable broodstock salmon fights have come in early-to-mid October.

The next installment will be about tackle and gear. There are some changes this year and my tackle choices will reflect those changes. Stay tuned...
Posted by Ben B. at 11:32 PM 2 comments:

Email ThisBlogThis!Share to TwitterShare to FacebookShare to Pinterest
Labels: fishing


Until this season, I had only fished very small Gray Ghosts and not too frequently at that. I don't think I ever hooked a fish with one. While fishing Connecticut's Farmington River this past spring, I tried a larger (sz. 4) Gray Ghost and did quite well, landing several respectably sized holdover brown trout. It was in between a Hendrickson hatch and spinner fall, and it seemed like many of the larger trout preferred the larger meal.

I have a few friends who swear by this fly, so I figured I should give it a go. I wanted to tie some even larger than what I had, but was not crazy about fishing a 10x long streamer hook. I decided to convert it to a tube fly and substitute some more "modern" (read: flashy!) materials.

I have plans for these tubes...Primarily, I want to use them to target landlocked salmon this fall. Also, there are a couple of lakes nearby (one really close to home) with large seeforellen brown trout coupled with a population of landlocked alewives. I've done well fishing one lake's spawning run, but have yet to take a trophy seeforellen brown. Time to get cracking on that...

Step-by-Step: How to Fold a Hackle With Your Scissors


I was first made aware of the scissor folding technique by my favorite Miramichi River guide, Darryl Tucker. It took Darryl but a few seconds to fold a hackle with his scissors, while it took me much longer to fold one by hand.  Darryl pre-folds his hackles by placing the tip of the feather in the jaw of his Regal vise. I have seen tyers fold hackles with scissors while the hackle is tied into the fly, but I liked Darryl's method more. The only thing I disliked was using the vise jaws to hold the hackle. The easy solution to the problem was to use a variation of the "third hand." I dangle hackle pliers from the rotary end (cam end on an HMH) of my Renzetti Traveller vise, which frees up both of my hands (see below).


I have a set of these brass Dr. Slick hackle pliers on both my HMH Standard and my Renzetti Traveller. I just purchased a Renzetti Master vise and, unfortunately, the vise shaft is too thick to accommodate this style of hackle pliers. Luckily, I stumbled across a tool called "Swiss pliers w/spring ring." I placed the Renzetti Master's stem through the ring end of the tool. It works great and stays out of my way (see below).


Anyhow, let's get to the step-by-step instructions on how to fold a hackle with your scissors...

Step 1: Select a hackle. This orange hackle comes from a Chinese rooster cape 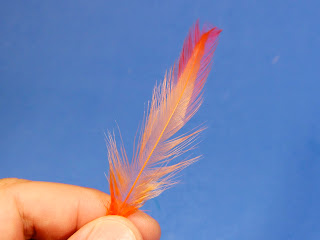 Step 2: Pull downward on the barbs so they are more or less perpendicular to the stem 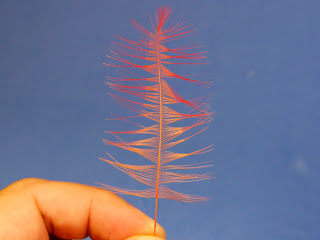 Step 3: Place the tip of the hackle in the dangling hackle pliers 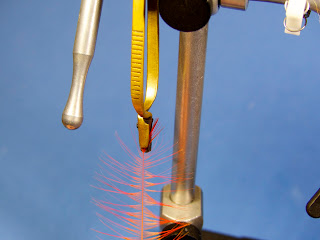 Step 5: Use another set of hackle pliers to hold the feather steady.You can use your fingers, but I find the feather rolls less when using pliers. 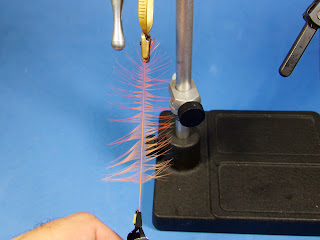 Step 6: Place the tip of your scissors against the hackle stem, just below the upper set of pliers. The tips of the scissors should be at a right angle to the barbs. 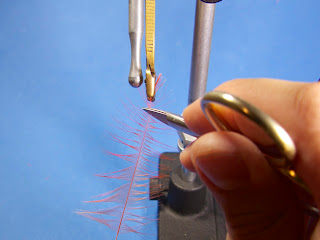 Step 7: Drag the tips of your scissors downwards along the stem. You should feel the barbs "clicking" as the scissors fold them inwards. 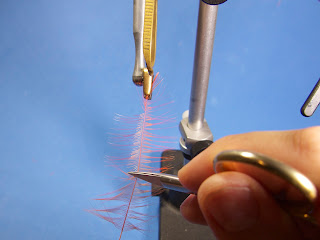 Step 8: When you finish one side, repeat Step 7 on the other 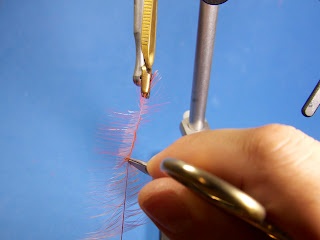 Step 9: Determine if the fold will suit your needs 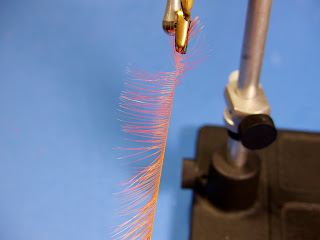 Step 10: If you desire, the hackle can be folded over even more with moistened fingers 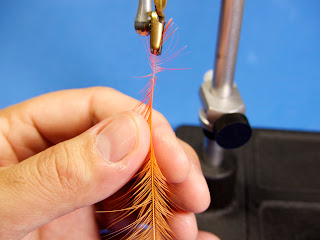 The folded hackle, ready for tying in only seconds after being plucked from the neck (below) 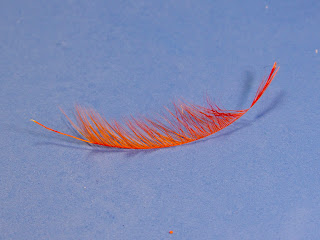 I usually fold with the scissors then, if necessary, make manual adjustments while wrapping the hackle. I tend to stroke the fibers into place as I wrap the hackle. This is a fast and effective way to fold both body and collar hackles. If the hackle is for a fishing fly, I can fold it well enough to use in about 10-20 seconds, plucked off the neck or saddle. If it's for a show fly, I usually am a bit more careful when I fold. This technique even works with very stiff dry fly hackles, which might be otherwise difficult to fold using only your hands.

Give it a try sometime. Make sure you feel the feather "click." You'll know what I mean when you feel it happening. If it's clicking, you're doing something right!